The project, valued at 24 million South African Rand (£1.75 million) and secured via Bluewater Bio’s licensing agreement with Headstream Water Holdings, is for the extension of Hartbeesfontein Wastewater Treatment Plant (WWTP), owned and operated by the City of Matlosana Local Municipality in North West Province, South Africa.

The HYBACS upgrade has been designed to double the plant capacity from 4 to 8 megalitres/day, an uplift of around 60,000 population equivalent, and is driven primarily by increased load from a local abattoir. The first project phase, which is already under construction, comprises the deployment of six SMART™ units, the system that powers the HYBACS process.

Hartbeesfontein represents BwB’s third order for HYBACS in South Africa in as many years, and marks the company’s largest contract award within the region to date. Combined with the four SMART units already performing to high standards at the Botleng and Swartruggens plants, this latest order will bring the total African installed base to ten. In anticipation of future population growth, civil engineering works have already been prepared at Hartbeesfontein for an additional two SMART units and two more are under construction for deployment by Headstream to satisfy increasing market demand for rental units.

Daniel Ishag, founder and chief executive officer of Bluewater Bio International commented: “We are very pleased to have secured our third order, via Headstream, for the Hartbeesfontein wastewater treatment plant. With many regions of Africa in urgent need of wastewater upgrades and extensions, Bluewater Bio’s solution, with its superior economics and energy savings compared to conventional Activated Sludge, is ideally placed to serve this crucial social and political need.” 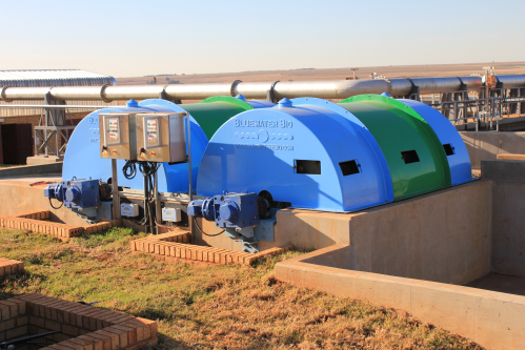