Storm flows during wet weather can cause major problems in wastewater plants. A team put together by Veolia Water Solutions and Technologies describe how the BioACTIFLO process can provide biological treatment with high-rate clarification in such circumstances.

Current Environmental Protection Agency (EPA) regulations require that all Sanitary Sewer Overflow (SSO) streams shall undergo some form of biological treatment before being discharged. However, no physical/chemical process had been recognised by EPA by 2006 as a sufficient means to meet the permit regulations of the National Pollution Discharge Elimination System (NPDES) in the US, which indicates biological treatment is required to treat the excess storm flows during the wet-weather, before discharge.

To address this problem, the BioACTIFLO® has been developed as a high rate process that combines biological treatment with the ballasted high-rate clarification ACTIFLO®, providing highly effective removal of suspended solids and biological oxygen demand (BOD).

The results of a pilot study are presented to illustrate the BioACTIFLO® process as a high-efficiency biological treatment system for storm flows, meeting the EPA requirements.

During storm events, many wastewater plants treating sanitary sewer flows experience infiltration and inflow. These plants may not be able to achieve the requested effluent quality effectively when the total flow exceeds the wet-weather treatment capacity. Such peak flows can cause treatment problems by hydraulically overloading the biological process or washing solids out of the secondary clarifiers, resulting in a situation known as sanitary sewer overflows (SSO). In the worst case, untreated wastewater may bypass the plant. Providing for full secondary treatment by expanding the treatment facilities to handle the extremely high yet rarely occurring flows, especially those relying on activated sludge, has proven to be a financial and technological challenge [1]. Due to the fact that infiltration and inflow conditions resulting in SSO are often seasonal in nature, intermittent in occurrence, and unpredictable in terms of hydraulic loads, additional biological treatment capacity is a challenge to size and to bring on line during the SSO events.

However, current Environmental Protection Agency (EPA) regulations require all SSO streams to undergo some form of biological treatment before being discharged. As of 2006, EPA did not recognise any physical/chemical process as sufficient means to meet the permit regulations of the National Pollution Discharge Elimination System (NPDES). Thus, it is required that physically/chemically treated effluent shall be discharged to holding ponds and then undergo subsequent treatment by the conventional Return Activated Sludge (RAS) process following the rain events, before discharge. This requirement still holds true even if the physically/chemically treated wastewater meets the plant's NPDES permit requirements.

To address this problem, BioACTIFLO® was developed as a high rate process that combines biological treatment with the ACTIFLO® microsand enhanced flocculation and high rate clarification process. This provides highly effective removal of suspended solids, along with high removal efficiency of both solids and biological oxygen demand (BOD). The process can be utilised as a high rate treatment solution that not only achieves the biological treatment of excess flows but also preserves the integrity of the main plant by preventing washout of the biomass.

The process schematic for the BioACTIFLO® is illustrated in Figure 1. The process incorporates a biological solids contact basin with a high rate clarifier using microsand enhanced flocculation and settling tank. On one hand, the special design of the solids contact basin followed by a high rate clarification process has a shorter hydraulic retention time and a lower mixed liquor suspended solids (MLSS) concentration as compared to conventional aeration basins. On the other hand, the microsand ballasted flocculation and settling process enhances the system stability, which enables the BioACTIFLO® unit to achieve consistently high quality effluent while treating a wide range of rapidly varying conditions. Compared to conventional biological treatment systems, the BioACTIFLO® has a low footprint, due to its short hydraulic retention time and high surface loading rates.

In the solids contact basin, biological solids in RAS have the capability to absorb soluble BOD and store it as food form from the outside water source. The absorption rate is based on the time that RAS contacts with the outside water source, which is primary effluent. The amount of biological solids contacted with the primary effluent is also directly proportional to the amount of BOD that is absorbed. Mixed Liquor Suspended Solids (MLSS) is used for measuring the concentration of RAS and the primary effluent, which will determine whether the process is successful or not.

In the BioACTIFLO® process, the target MLSS in the solids contact basin is maintained by using a portion of the existing plants RAS stream plus concentrated sludge from the ACTIFLO® high rate clarification process. The MLSS is aerated to facilitate rapid uptake of BOD in the biomass.

Coagulant is added to the raw water in a separated mixing tank. The coagulated water then enters the second tank called an injection tank where microsand (60–120 μm) and polymer are added. The microsand provides a large contact area and acts as ballast to enhance the settling of the flocs. The destabilised suspended solids will bind to the microsand through polymer bridges. In the maturation tank (third tank), the particles agglomerate together and grow into high density flocs [2], [3] and [4].

After the flocculation, the water enters the lamella tank. The flocs settle rapidly owing to the microsand, which makes them much heavier than in conventional precipitation systems. This implies an upflow velocity in the lamella separator which is 30-80 times higher than in conventional precipitation plants. Typical upflow velocities of the ACTIFLO® process are 80-120m/h. As a consequence of these high upflow rates the system footprints are between 5 and 50 times smaller than conventional clarification systems of similar capacity [5]. Sludge and microsand are withdrawn from the bottom of the lamella separator and pumped back to a hydrocyclone, in which the sand is separated from the sludge. The microsand is returned to the injection tank to be reused, whereas the sludge is normally led to the Activated Sludge Tank.

In order to evaluate a new method to achieve the biological treatment requirements, pilot studies have been conducted using the BioACTIFLO® at several wastewater treatment plants for SSO treatment since 2004.

The existing system achieved excellent treatment during CSO events, with Total Suspended Solids (TSS) and BOD removal efficiency of 85%. During the wet-weather, the inflows are treated by the ACTIFLO® system, and the treated excess flow is discharged to a holding pond and later treated through the existing conventional plant once the CSO event is over. This process (see Figure 3) satisfies the NPDES permit because all water has some biological contact before discharge.

However, for a given holding pond volume, the current setup is only valid for short wet weather events. During extended wet weather periods, the pond could be filled, leading to operate the CAS at maximum flow, and once treated with the ACTIFLO®, the excess influent water cannot be held. Quickly the system becomes hydraulically limited, and as a consequence direct discharges of non treated water could occur, leading to fines although the overall water quality meets the NPDES requirement.

The widely accepted solution for SSO during storm events, storage tanks or holding ponds, is coming under increasing pressure for two reasons [6]:

• The high capital costs of building and maintaining these huge concrete structures and the amount of land required. This can be particularly difficult in urban areas;

• The increasing restrictions on direct discharge or spills, particularly where the receiving waters are highly regulated.

To investigate the proposed solution based on the BioACTIFLO® process to meet this biological treatment requirement, a pilot study was conducted at the Fort Smith Wastewater Treatment Plant. The process schematic of the pilot study system is shown in Figure 4. The excess primary effluent is pumped to a mixing chamber for contacting and aeration, as a solids contact basin, before feeding the ACTIFLO® pilot for separation. In this pilot, the sludge from ACTIFLO® is discharged directly.

The pilot tests at Fort Smith were conducted from November 2004 to January 2005. The capacity of this pilot was 200gpm (45.4m3/hr), which was typically set-up to draw the effluent from the primary clarifier. The operation parameters for this pilot study are listed in Table 1.

During the pilot study, the concentration of MLSS contact time in aeration basin prior to ACTIFLO® treatment and the pollutant removal efficiency were analysed.

MLSS concentration and the pollutants removal

Mixed liquor suspended solids (MLSS) is used for measuring the concentration of return activated sludge (RAS) blended with the primary effluent, which is the influent of the BioACTIFLO® system, and also determines whether the process is successful or not.

With different MLSS concentrations in the mixing chamber, the removal efficiency of Total Suspended Solids (TSS) of ACTIFLO® pilot ranged between 80% and 95% (see Figure 6). The results showed that ACTIFLO® meets the 85% TSS removal target, and with higher MLSS concentration in the Aeration Basin, the ACTIFLO® has a better TSS removal, up to 90%.

The same result was obtained with the soluble biochemical oxygen demand (SBOD) removal. When the MLSS concentration is 800mg/L, the system also has the highest SBOD removal efficiency (see Figure 8).

Similarly, when the MLSS concentration is 800mg/L, the system also had the highest SCOD removal efficiency.

In the mixing chamber, biological solids in the return activated sludge (RAS) have the capability to absorb soluble BOD (SBOD) and store it as food form from the outside water source. This is due to the absorption rate, which is based on the time that RAS contacts with the outside water source (the primary effluent) and the amount of biological solids (the MLSS concentration). When the proper MLSS concentration is maintained in the mixing chamber, good pollutants removal efficiency could be achieved.

Aeration time and the pollutants removal

Optimum treatment was observed at 800 mg/L MLSS and 30 minutes aeration contact time. Turbidity and TSS removal were in excess of 90%, producing typical effluent turbidity of 2 NTU and TSS of 5 mg/L. The optimum operation condition also demonstrates the principle of the ACTIFLO® system. In the solids contact basin, a target MLSS concentration is kept by using a portion of the existing plant's RAS stream blended with concentrated sludge from the ACTIFLO® high rate clarification process [7].

The pilot study at Fort Smith WWTP demonstrated the ability of the ACTIFLO® process to provide secondary treatment to biological primary treatment effluent. During the trial, several aeration durations and MLSS concentrations of mixed liquor suspended solids (MLSS) prior to treatment in the BioACTIFLO® system were tested. Results indicated that the optimum treatment was achieved with 30 minutes of aeration time and 800 mg/L MLSS. Greater than 85% turbidity and TSS removal could be achieved in the pilot test.

The pilot study results have demonstrated that the BioACTIFLO® process can be successfully applied as a high-rate biological treatment system for storm flow that will not only produce high efficiency solids removal, but also provides biological treatment and removal of both particulate and soluble BOD according to the NPDES standards. This process is well suited for plants hydraulically limited to handle excess storm flows and without enough capacity for biological treatment during these events. As the BioACTIFLO® achieves steady state water quality in minutes, with a footprint several times smaller than conventional clarifiers, it is ideally suited for high rate treatment of peak wet weather flows thereby eliminating sanitary sewer overflows (SSO). 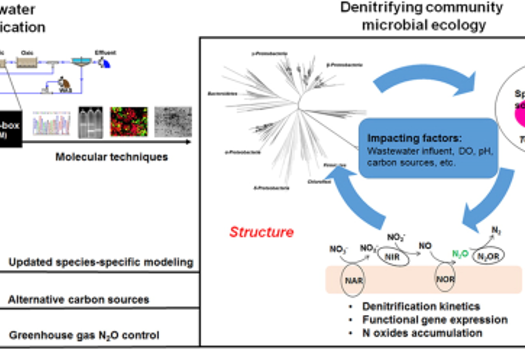 Review of microbial ecology of denitrification in biological wastewater treatment 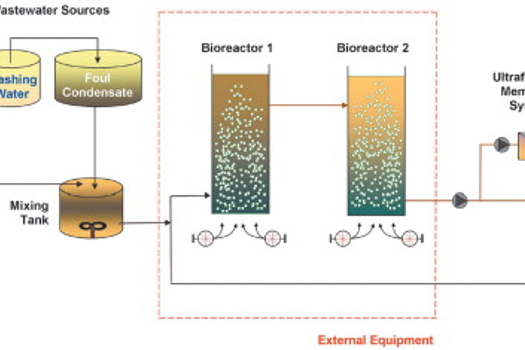 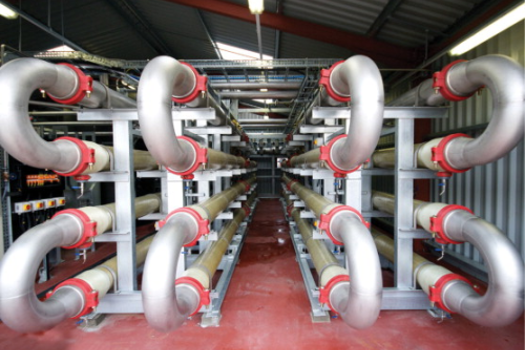