US-based UV disinfection specialist Aquionics met with an unusual request when it was asked to help design a mobile UV disinfection system with in-house engineering staff for a Native American tribal reservation in rural Montana, USA.

The Confederated Salish and Kootenai Tribes are comprised of the Bitterroot Salish, the Pend d'Oreille and the Kootenai tribes. The Flathead Reservation of 1.317 million acres in northwest Montana, near the Canadian border, is now the Tribe's home, but their ancestors lived in the territory now known as western Montana, parts of Idaho, British Columbia and Wyoming.

At the reservation, the Confederated Tribes needed to treat secondary wastewater at two remote sites. As is commonplace in the Midwest, where land is plentiful, the Tribes use aerated lagoons to provide secondary treatment of their wastewater. Each site, situated approximately 25 km apart, consists of a two-cell lagoon structure, the first an aeration lagoon and the second lagoon for storage prior to final disinfection and discharge into local watercourses.

Each site needs to be discharged every three to four months — whenever the secondary lagoon is full. Prior to discharge the wastewater must be disinfected so that the BOD (Biological Oxygen Demand) value is no higher than the discharge permit of 30 mg/l and that the faecal coliform count is below 200 units/100ml. The Tribes had originally considered installing fixed, open channel UV disinfection systems at each location for the final treatment stage, but was concerned about the huge expense.

Aquionics' local representative, Doug Mitch of Able Wright, worked closely with the Tribes' in-house engineering staff to develop an alternative approach. The solution was a turn-key mobile disinfection unit capable of serving both wastewater facilities. Consisting of a 2.5 × 4.8 m enclosed trailer, it contains a pair of Aquionics closed vessel disinfection chambers installed in series and fitted with medium pressure UV lamps. In addition there are various associated controls, an end-suction centrifugal pump and piping system, and lights, ventilation and cam-lock hose connections located on the exterior.

The only additional site work required at the two lagoons was the installation of single phase 230V buried power supplies and outlet pedestals at the discharge locations, situated on the dykes surrounding the lagoons. The suction hose is connected to a pipe that extends into the lagoon, with the opening 30cm above the lagoon's floor, so as not to extract sediment from the bottom. The total cost of the mobile disinfection unit, along with the site work at both facilities was approximately 40% of the cost of two open channel UV systems — a significant saving.

When one of the lagoons is almost full the mobile unit is driven to the discharge point and connected up. The UV system and suction pump are activated and left running continuously, at a rate of 340 l/m, for approximately four weeks or until a third of the contents of the lagoon has been removed. This process can happen at any time of the year, even in the middle of winter, when temperatures can be well below freezing. “This is when the medium pressure UV lamps really come into their own,” says Mitch. “Below +10°C, the disinfection effectiveness (as measured by relative UV output) of low pressure UV drops off dramatically, while the effectiveness of medium pressure UV is virtually unchanged, even below freezing.”

Another benefit of medium pressure UV is its permanent effect on microorganisms. UV is part of the electromagnetic spectrum between visible light and X-rays. The specific portion of the UV spectrum between 185–400 nm has a strong ‘germicidal’ effect, disrupting the DNA of microorganisms, rendering them unable to reproduce. Microbial DNA absorbs UV most effectively at 265 nm, a wavelength that medium pressure lamps produce in abundance. In addition to emitting UV at this optimum ‘peak’ wavelength, medium pressure lamps also emit UV over a much broader range of wavelengths (between about 185 — 400 nm) than low pressure lamps. This broad output has been shown in independent tests to cause the permanent inactivation of both pathogenic and non-pathogenic microorganisms such as E.coli ([1], [2] and [3]).

Low pressure UV lamps produce just a single peak of UV output at 254 nm. While also having a strong germicidal effect, the independent tests mentioned above showed that some microorganisms were able to repair or ‘reactivate’ themselves after exposure to UV from low pressure lamps, especially if they are subsequently exposed to sunlight (known as photoreactivation) — as is often the case in wastewater treatment facilities.

It is thought that the permanent damage caused by medium pressure UV may be a result of the UV at other wavelengths, such as 240 nm and 280 nm, having an effect on other intracellular molecules such as RNA and enzymes, which are unable to repair themselves.

The implications of these findings are important for owners and operators of wastewater treatment facilities, who need to be sure that the treatment is permanent. This is especially the case when the treated liquid will subsequently be exposed to light and make its way back into the environment. Zimmer at al (ref 1) suggest that medium pressure UV could therefore provide better protection against photoreactivation if UV treatment occurs prior to any process units in which water is exposed to light for even a short time.

Another interesting feature of the two installations is that the transmissivity* of the wastewater passing through the UV chambers is relatively low. The Tribes have a permit for a T10 transmittance value** of 20% and a TSS (Total Suspended Solids) value of 30%. What these values mean in practice is that the wastewater would appear rather ‘cloudy’ to the naked eye — drinking water would be required to be of much higher quality. “The UV has to work hard to penetrate the full distance from the UV lamp, which runs down the centre of the treatment chamber, to its inner surface, and the fact that the wastewater coming out of the UV units into the rivers meets all the required permits is a real testament to the effectiveness of the technology,” adds Mitch.

In 2007 there was algal infestation of one of the lagoons which prevented the UV system from working optimally, due to the reduced transmissivity. The tribe replaced the pipes linking the aeration lagoon with the secondary lagoon and applied chemical treatment to remove the algae, and since then there have been no reported problems.

“Because the access roads to the lagoons are quite bumpy, care needs to be taken when transporting the mobile unit from one site to the other,” reports Mitch. “While this is a minor inconvenience, it is more than offset by the huge cost savings. The initial estimate for fixed, open channel UV disinfection systems was approximately US$100,000 at each site. The mobile unit, including all the UV equipment, cost just US$60,000. With savings like that, a little careful driving every few months is a very small price to pay. We are very proud of the project as it addressed the technical disinfection needs of the community, with proper attention paid to their cost and value concerns. It also provides the Tribes with a highly versatile disinfection system,” he concluded.

* Transmissivity is a measure of the wastewater's ability to transmit UV light at the germicidal wavelengths.** T10 is the percent of UV radiation flux power remaining after passing through a layer of 10 mm in thickness, measured at a wavelength of 253.7nm. 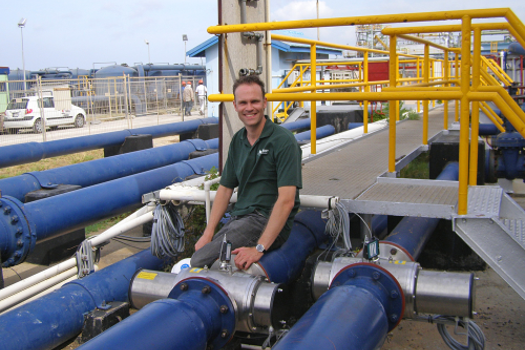 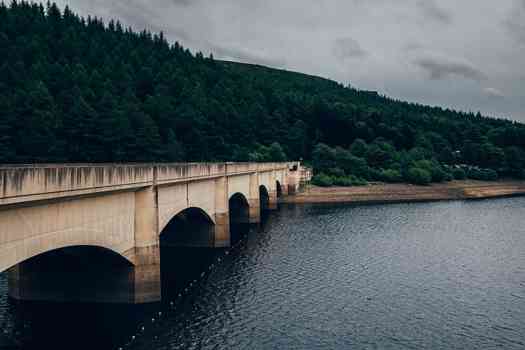 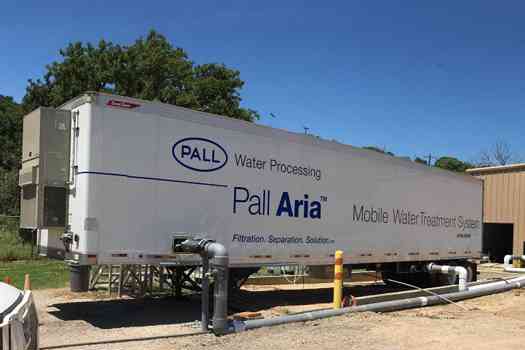 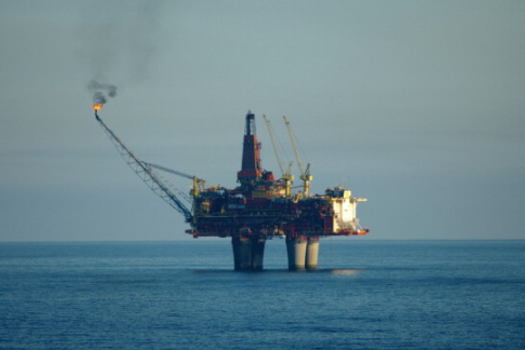 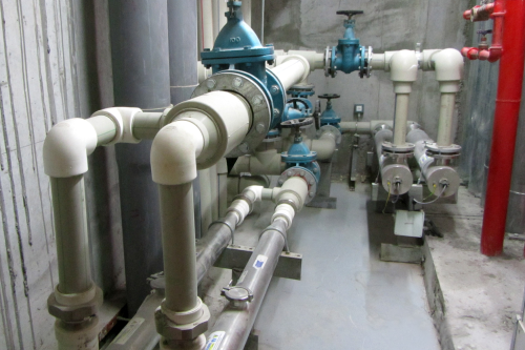